“It’s not that you love the planet, but that you hate humanity.”

I am trying hard to find balance in my mind between two goals set by Toronto: on-demand Accessible Taxi service for members of the disabled community, and Net-Zero emissions.

Unfortunately, it seems that as Toronto hopes to move forward toward its goal of Net-Zero emissions, the goal of on-demand Accessible Taxi service is demonstrably, measurably being pushed in reverse.

For example, City Taxi reports that while it had 56 Accessible Taxis within its fleet a year ago, it has 18 now. Toronto’s current count of insured, operating Taxis is 2200, less than half of the 5500 plates on the road before Rideshare was legalized in 2016.

At that time, Toronto was pushing hard to achieve the goal established by disabilities communities of having 6 per cent of Taxis be accessible. With 330 full-time Accessible Taxis working, the community felt it could achieve its goal of “on-demand” Accessible Taxi service. In 2015, the industry surpassed the 6 per cent goal and while the system had flaws, it was very close to meeting or surpassing all the benchmarks set.

Fast forward to 2022: with less than half of its full fleet of Taxis that can even afford to be on the road, Toronto probably has at best half of the operational Accessible vans. The idea of a beleaguered operator spending enormous additional funds on a fully electric vehicle, still to be modified, and not yet even insurable, remains a pipedream.

The goal of “on-demand Accessible service” is evaporating before our eyes – but no one seems concerned. No one is sponsoring any protests or press conferences. No one is trying to make it an issue in this fall’s municipal elections.

Is there a real risk that we are so focused on saving the planet from unknown threats in the dim, distant future, that we are willing to tell people in wheelchairs that they will have to abandon their hopes of independent transportation today?

Recently, Jordon Peterson suggested “It’s not that you love the planet, but that you hate humanity.” Those words echo in my mind.

Now, as committed, Toronto is getting ready to launch its “Vehicle for Hire Net-Zero Working Group.” Numerous skeptical Taxi industry observers have already predicted that the City wants to mandate that all VFHs be 100 per cent electric, and that the Working Group is just window dressing so staff can tell Council they consulted with stakeholders, and everyone thinks 100 per cent electrical VFHs is the way to go.

“Uber already had its EV demonstration, last week in Mississauga,” one Taxi owner told me. “So, it’s done.”

The deadline to submit your application to be part of the VFH Net-Zero Working Group is Sunday, October 2nd. 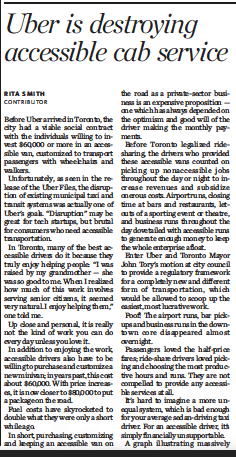 Taxi News in the news