FleetLogging has released its recent research into taxi rates from the world’s airports. Toronto/Pearson ranks #122 on the list at a charge of $50 from the airport to downtown Toronto.

“These studies are conducted with the aim of taking helping consumers, by taking the pain out of preparing an international journey,” says Lee McCullagh of NeoMam Studios, which designed the interactive graphics. “These studies are also designed to help businesses understand the economics of each country and how the services they provide can vary in cost significantly.”

Some highlights of the study include:

To search the interactive chart below, click on any of the four headings at the top of the chart (Rank; Airport; Location; Price to City Centre) to re-sort information in the most convenient format for your use.

“For this project we made a list of every international airport then used Rome2Rio and Booking.com Taxis to find the price of a taxi ride to the city center it serves. Then we calculated the price per km for each airport,” McCullagh explains.

To see the results literally “mapped out” on a series on world maps, visit the FleetLogging site at https://fleetlogging.com/expensive-airport-taxis/.

This is the second of a series of campaigns from FleetLogging. The first was The Transport Index. 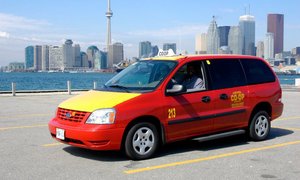 No decision yet on Accessible van age extension

The Uber Files: what do they mean? Do they mean anything at all?